on July 31, 2020
Bishop Barron and "Open Thomism."
Matthew Bellisario O.P 2020
Bishop Barron recently posted this on Twitter.
"Friends, ever since I was a young man and throughout my academic career, my touchstone has always been the great St. Thomas Aquinas. I hold to an "open Thomism," one that welcomes Augustinianism, Bonaventurian thought, and contemporary thinkers like Newman, Balthasar, and Ratzinger. To incorporate these frameworks together is to follow a very integrated Catholic spirit." 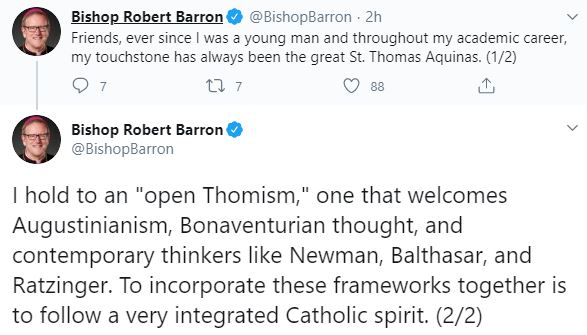 Today's theological climate in the Church is one of the worst we have ever seen. I would propose that since the time of the black plague where the educated clergy died off and were replaced by warm bodies, theology has not witnessed such as debasement. One of today's issues is the problem of theologians trying to be original. Barron obviously thinks he has created a new category of Thomism, which he fails to realize ceases to be Thomism. Indeed he has created a new school alright, but it has nothing to do with Thomism.
What is a school of theology?
Anyone who has studied the many theological schools knows that there are foundational elements that are common to all. I would summarize them something like this:
1. Sacred Scripture is the most important reading source for meditation.
2. We are created to be deified and perfected in the image of God primarily through the grace given in the Sacraments.
3. In order to be perfected, you must repent for your sins and exercise some form of ascetic penance.
4. You must detach yourself from worldly things.
5. The Eucharist is the center of our faith and spiritual nourishment.
6. We must work on exercising virtue and rooting out vice with the help of prayer and grace.
7. We must persist in prayer asking for all the gifts we need to grow in the love of God.
8. There are different types of prayer: First vocal prayer, then meditative, and finally contemplative.
9. There are generally three stages of the spiritual life: beginners, intermediates, and advanced.
This being said, there are philosophical frameworks within these schools that deviate drastically from one another. Beyond these basics, there is the issue of how they are applied and since theology is never truly separated from philosophy, different theologians have different opinions of how these basics are viewed and applied. This is why the Church has referred to these variations as different "schools" of theology. For example, Bonaventure's framework of thought is significantly different than that of Thomas. They disagree on several points that separate their theologies but beyond the basics listed above. They both hold to theological orthodoxy but they view certain elements of application differently. Thus one is known as Scotist theology (Classic Franciscan) and the other Thomist.
For example, the primacy of the intellect and will are viewed differently by these two schools. Despite these differences in thought, from Bishop Barron's viewpoint, you can just merge or fuse these two together somehow and make a Frankenstein theological school which he calls "open Thomism". In fact, he says you can fuse several frameworks together. Would that not undermine the idea of a "framework?" What he fails to realize is that his idea defeats the very purpose of defining schools of theology. This is similar to the error we see today in a society where race and gender are being done away with and merged together into an androgynous pool of confusion.
Frankenstein
To understand how this Frankenstein theological stew tastes you have only to look at Bishop Barron's theology over the past several years. I will only use three examples here.
1. He claims to the hold Hans Urs von Balthasar's view of hell being possibly empty over Saint Thomas', and he claims this openly on his video concerning hell. So he admits that these two opinions conflict and yet he calls himself a Thomist. Yet, no Thomist in history has ever held to such a line of thinking until you get to the modernists who claimed to be melding Thomism with the incompatible false subjective philosophies of Hume, Hegel, Descartes, Kant, and many others. Once you do this fusing of incompatible philosophy you no longer have Thomism! You can watch his hell theology in action at this link.
2. Barron demonstrates theological instability when he had a chat with Ben Shapiro about religion. Shapiro, usually a straight shooter who is not easily offended asked Barron if he as Jew needed to convert to Catholicism. Rather than answering in the affirmative with a charitable explanation Barron claimed that Jesus was only the privileged route to salvation, and let poor Ben go on thinking that it was not really necessary to convert. No true Thomist would ever say such a thing. He also claimed that an atheist can be saved, which we know is not possible.
3. Lastly, although I could list others, Barron has also said that Adam and Eve are not literal figures. As we know, all Thomists and all orthodox theologians for that matter understand that without the historical literal figures of Adam and Eve the entire dogma of Original Sin is destroyed and the need for Christ as our savior along with it. Go to this link and fast forward to around the 5:50 mark to hear his "open Thomistic" thought.
Conclusion
It is plain to see that Bishop Barron's newly created "open Thomism" is not working out so well for him and consequently those that follow him. He is certainly no Thomist and his line of thinking does not follow that of a Thomist. In fact, I would say that he has created his own school of theology which I would call the "Barronite Frankenstein School of Theology." It is a smorgasbord of incomplete theologies and bad philosophies combined and fused together to form a theological Tower of Babel which has no true form, no true coherence, and thus a disintegrated spirit, rather than a Catholic one. There is no such thing as "open Thomism" and there never will be. It is like saying to someone with a straight face, "I hold to a non-Thomist-Thomist position".
Aquinas Doctrine Dogma Modernism Theology Thomism 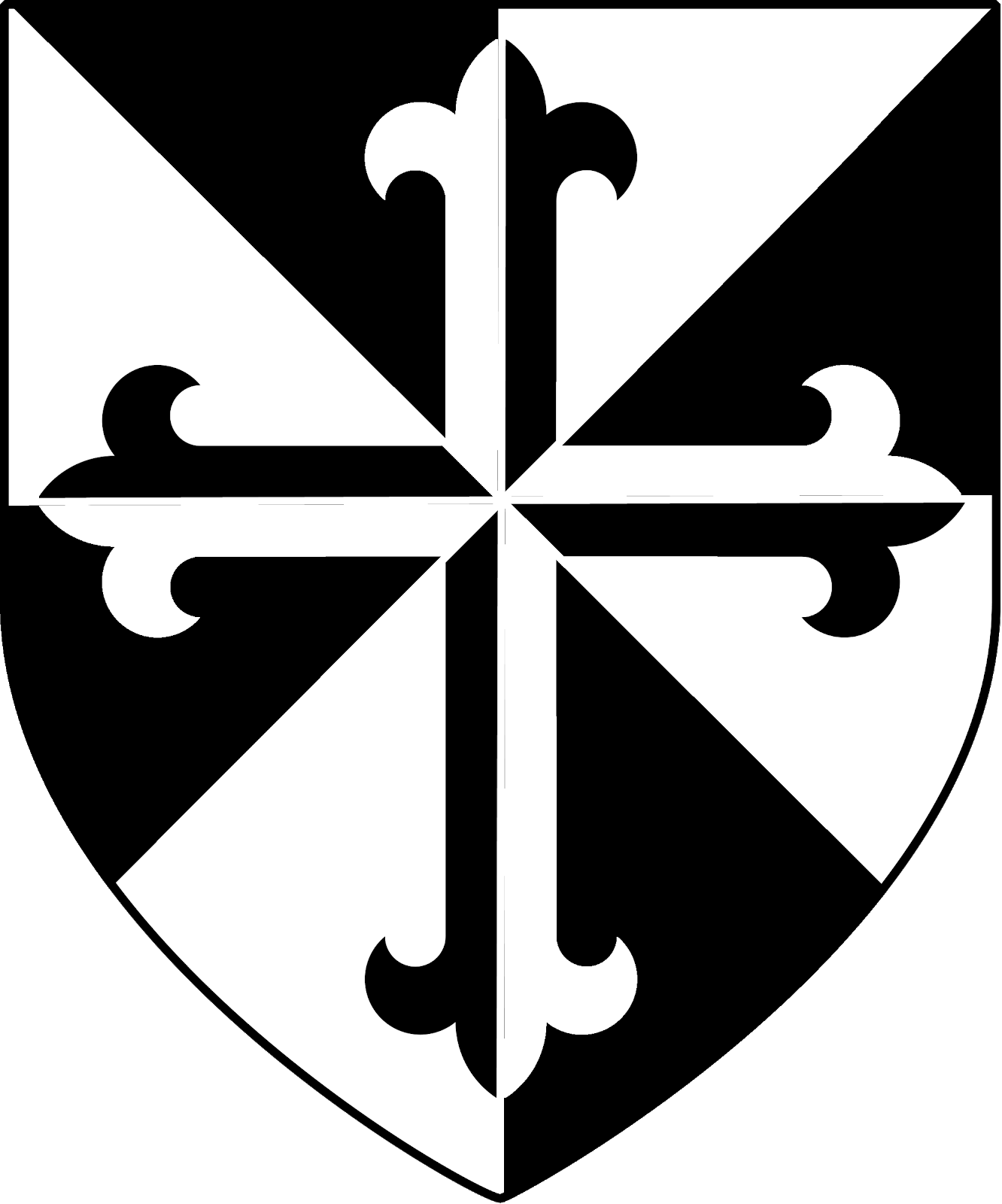 The Dominican Third Order provides a viable avenue to live a life of union with God despite the obstacles we face in the world and the Church today. Prayer, Study and Community provide a spiritual foundation for the appointed task of Preaching for the salvation of souls!
Now is the time to cry out, to grieve. The time is ours, because Christ's bride is being persecuted by Christians, by false and rotten members. But take courage, because God will not scorn the tears and sweat and sighs poured out in his presence. My soul is jubilantly happy in this grief- because among the thorns I smell the fragrance of the rose about to open. Gentle First Truth says that through this persecution his will is being fulfilled as well as our desires. (St Catherine Letter T137)
"It is not the pleasure of cultivating our mind that underlies our intellectual efforts: it is love of Him Who is the Truth itself, it is the love of God." Fr. Joret O.P.

Some years ago, I was asked by my parish priest to help at an exorcism. My pastor told me that he would be assisting an exorcist, and needed another person to help, and so I accepted.

When I showed up to the church on the morning of the first session, I saw a silver-haired priest sitting in a chair in his cassock, holding his cane, discussing what was going to be taking place during the exorcism. This older priest welcomed me, and thanked me for taking part in what he called, “an important spiritual work of mercy.” That was how I met Monsignor Anthony A. LaFemina, who since that day, has been a great friend and spiritual advisor. In fact, I would not be a Third Order Dominican today if it wasn't for his wisdom and assistance. I owe much to him.


Monsignor LaFemina was born on November 19th, 1933 in New Haven, Connecticut and was ordai…

Monsignor was very concerned about the direction the Church has been heading in our time. He was saddened to see how far Catechesis had degenerated in the average Catholic parish. That the Church's teachings concerning original sin, heaven, hell, divorce and remarriage, and others were being undermined by those in the hierarchy with little opposition bothered him immensely. This is why he chose to go into the average parish once a month or so to offer conferences and holy hours. In our day and age, many Catholics do not take seriously the gravity of mortal sin. This paper was originally used as a talk for a parish. I left in the text his bold…